Brian De Palma is one of those directors whom I absolutely love, but always inspires heated debate amongst film buffs. De Palma’s biggest critics have accused him of being a hack who made his career by ripping off Sir Alfred Hitchcock, and they consider all his films to be silly and over-the-top. Others, like myself, believe that when Brian De Palma is at the top of his game, few directors can convey the pure exhilaration and joy of cinema like he can. I won’t deny that De Palma has borrowed a lot of ideas from Hitchcock and other filmmakers, but I think he is very good at building upon these ideas and injecting them with his very own unique style. De Palma made a string of stylish Hitchcockian films throughout the late seventies and early eighties until he branched out by directing the iconic gangster classic, Scarface. Ever since then, De Palma has mostly veered away from Hitchcockian-style thrillers and chosen to work in other genres, but that doesn’t mean he hasn’t been compelled to still pay tribute to the Master of Suspense every now and then. In fact, his immediate follow-up to Scarface was probably the most Hitchcockian film of his career and what else can you say about a thriller where De Palma not only borrows the plots of both Rear Window and Vertigo, but winds up borrowing from himself as well? To this day, Body Double has always been the subject of heavy debate, as some film buffs love it while others consider it to be one of the stupidest thrillers ever made. I will not deny that Body Double is silly, but it’s also tremendously entertaining and a perfect example of how much fun an ultra-stylish, over-the-top piece of cinema can be.

The protagonist in Body Double is Jake Scully (Craig Wasson), a struggling actor who has just been fired from the lead role of a schlocky, low-budget horror film called Vampire’s Kiss (which ironically enough, would be the title of a Nicolas Cage horror film released five years later). Like Scottie Ferguson in Vertigo, Jake struggles with a crippling fear, which happens to be claustrophobia, and that can cause major problems when you’re trying to film a scene inside an enclosed casket. Jake’s situation gets even worse when he comes home to find his girlfriend cheating on him and is forced to find a new place to live. Jake soon makes friends with a fellow struggling actor named Sam (Gregg Henry), who is leaving on a job for a couple of weeks and needs someone to take over his duties of housesitting for a friend. When Jake discovers that the place is a spectacular Modernist house on stilts in the Hollywood Hills, he jumps at the opportunity. Before he leaves, Sam directs Jake to a telescope, which allows him to spy on a wealthy female neighbour named Gloria (Deborah Shelton) who is an exhibitionist and likes to perform an erotic dance in front of her bedroom window every night. Of course, Jake becomes fascinated by this woman and continues to watch her, but soon has reason to believe that her life might be in danger. Jake becomes so obsessed with Gloria that he begins following her everywhere and notices that a creepy Indian also seems to be stalking her. Of course, since he is technically a stalker himself, it puts Jake in the difficult position of deciding whether or not he should warn Gloria about what’s happening. Though they do wind up making out on the beach within two minutes of actually meeting each other…

Later that night, Jake’s worst fears come true when he witnesses the Indian break into Gloria’s home and murder her with a large power drill. Once the police hear Jake’s story, they write him off as a creepy pervert, so he decides to redeem himself by attempting to find Gloria’s killer on his own. This unexpectedly leads to him crossing paths with a major porn star named Holly Body (Melanie Griffith), who may hold the key to the mystery. Jake eventually discovers that he was a pawn in one of the most contrived and needlessly complicated schemes ever devised by a movie villain. I guess it goes without saying that the plot of Body Double is completely absurd, and it does not hold together at all if you were to think about it too much. It’s also likely that you’ll figure out the movie’s big “twist” almost instantly. However, it’s clear that Brian De Palma’s tongue is planted firmly in cheek and does not expect the viewer to take anything too seriously. Since De Palma was now planning to shy away from Hitchcockian thrillers at this point in his career, it seems like he wanted to go out with the ultimate Hitchcockian homage, which manages to both satirize and affectionately pay tribute to the genre. In addition to a storyline that’s a cross between Vertigo and Rear Window, De Palma manages to pay homage to (and sometimes even spoof) some of the standard themes and elements of his own work. The long sequence where Jake is following Gloria is reminiscent of his famous museum sequence from Dressed to Kill as there is almost no dialogue, and the story is told strictly through the visuals and Pino Donaggio’s grand orchestral score (the composer was to De Palma what Bernard Herrmann was to Hitchcock). Of course, when Jake and Gloria suddenly start making out in public to one De Palma’s patented 360-degree camera pans, you know the director is having a little fun with himself, and sure enough, De Palma winds up using the camera trick again during a surprising “porn-film-within-a-film” sequence! Jake’s foray into the world of pornography in the third act is completely out of left field, but undeniably hilarious, especially since Jake winds up starring in a porno that turns into a music video for Frankie Goes to Hollywood’s infamous hit song, “Relax”!

Craig Wasson, a frequent leading man in the 1980s who kind of faded into obscurity, is not an actor with a great deal of range, but he has a likable everyman quality that suits the role well. Jake is not a portrayed as a perfect hero, but as a flawed ordinary guy who makes a lot of mistakes and lets his urges get the better of him, but it’s very easy to identify with him and ponder what we would do in his situation. Of course, many viewers watching Body Double today are always struck by how much Craig Wasson resembles Bill Maher! 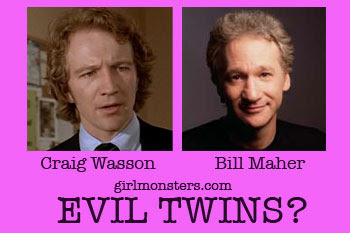 The real standout in Body Double is Melanie Griffith, who does not make her first official appearance until over an hour into the movie, but completely steals the show as Holly Body. This role helped jumpstart Griffith’s career and make her a prominent leading lady in Hollywood for the next few years, and even the negative reviews of the film still praised Griffith’s performance. De Palma originally wanted to cast porn star Annette Haven in the role of Holly, but the studio balked at that, but I guess it’s only appropriate he’d select the daughter of a frequent Hitchcockian leading lady, Tippi Hedren, as a substitute. Anyway, Body Double was not a big critical or commercial success during its original release, as many found De Palma’s direction to be over-the-top and self-indulgent, and he even wound up garnering a Razzie nomination for “Worst Director”. However, the film has managed to attain a cult following over the years, and the more self-indulgent aspects of the film are actually part of its charm. As silly as the Frankie Goes to Hollywood porno scene may be, it definitely makes you nostalgic for the 1980s. Body Double has also become notable for its frequent mention in Bret Easton Ellis’ novel, American Psycho. The story’s serial killer protagonist, Patrick Bateman, considers Body Double to be his favourite film, claiming that he’s watched it 37 times and that the power drill murder scene is his masturbatory fantasy. It’s worth mentioning that Quentin Tarantino is a big fan of Body Double, and some people have theorized that the film’s climax, which involves a dog attacking someone at a reservoir, may have provided the origin for the title, Reservoir Dogs. Overall, there’s nothing else that can really be said about Body Double except that it’s tailor-made for Brian De Palma fans, and that if you’re not a fan of the director to begin with, this film probably won’t make you one. However, for those with an appreciation for this sort of thing, Body Double remains a case study on how to make the silliest material work through the sheer willpower of filmmaking.