The Back Row with Extra Pulp: John Carter of Mars 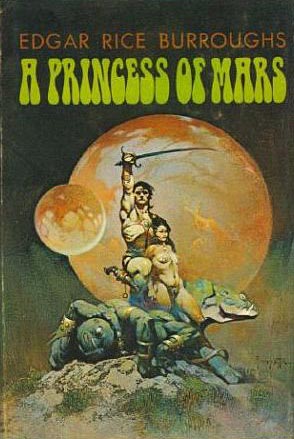 We at The Back Row feel that, despite its lackluster showing at the box office, John Carter was a fun, well written bit of swashbuckling sci-fi. And why shouldn’t it be seen as such? It was based on a series of books by Edgar Rice Burroughs – one of the best pulp writers of all time – and has influenced a century of sci-fi writers and film makers. So, with the recent release of John Carter on DVD, I thought I would write about the first three John Carter of Mars books (otherwise known as the Barsoom series).

Edgar Rice Burroughs is best known for his Tarzan series, but he wrote almost 70 novels. Not bad for someone who didn t start writing until he was 35 years old. Before writing he had failed at almost everything he put his hand to. One day he was reading a pulp magazine and came to the conclusion that if people got paid for writing he could write a story at least as bad as these. So, out of desperation he wrote the first John Carter book and started a brilliant career. The first John Carter of Mars story, A Princess of Mars, was published as a serial 1912, with the title, Under the Moons of Mars. It is a fun, action oriented, adventure story, with a brave and likeable hero, aliens, sword play, and a beautiful princess. It is part of what became known as the Sword and Planet genre, and inspired things like Flash Gordon, Star Wars and Avatar. Despite the fact that Edgar Rice Burroughs fills almost every page with action, he still finds room to develop characters and relationships. He also builds a new world on Mars. He reasons that Mars, having a lower gravity, an Earth man, like John Carter, would be stronger and jump higher than people native to Mars, thus giving his hero a scientific reason for having super powers. When reading or watching Sword and Planet stories I often wonder,

This entry was posted in Literature, Reviews, The Back Row's Weekly Serial Review. Bookmark the permalink.