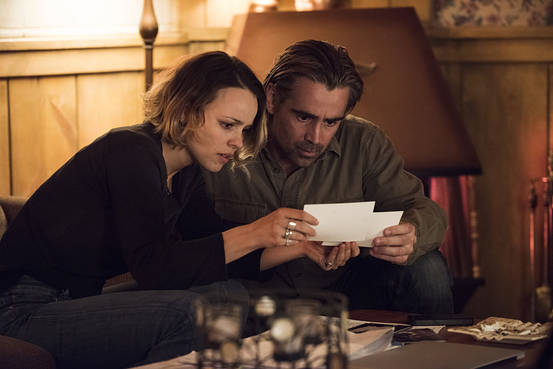 Emotionally raw and naked, Ray has become the sounding board for both Paul and Ani who confessed their darkest pasts to him without much foreplay. For someone as unhinged as Ray, he is the de facto priest of the group. The tapestry overlapping of McAdams’ molestation story was gritty and jittery all at once. It was clever symbolism to show them disrobing physically and figuratively and then redressing after they’ve collectively bared their souls.

It was bittersweet to witness Frank coax Jordan (Kelly Reilly) to disband her marital vows and expatriate to a covert locale despite her stubborn obstinance to remain yoked during this maelstrom of peril. Their schematic to rendezvous in two weeks with a rose in his pocket and a white dress is redolent of classic film noir.

Exit strategies abound but Frank, Ray and Ani are lockstep in their quest for vengeance. When Frank says he has “one more play” that the Russian competitors don’t know about, we anticipated a diabolical Rube Goldberg device of comeuppance for them. Unfortunately, Pizzolatto resorts to Frank jaunting around California manors and a cabin lodging with an arsenal by his side and slinging Antisemitic epithets over the phone.

Instead of a low-key switcheroo, Pizzolatto is uncharacteristically slapdash and highly predictable when Ray and Ani investigate a crew member’s house with the conveniently brandished crow’s head costume and incriminating photo development room. The problem is Pizzolatto has squandered most of the season on dead-end backstories and he neglected the overview of the Agatha Christie mystery at the center.

The indentured sex-slave ring and its victims, the railway blueprints and Paul’s closeted behavior; they’ve all evolved in a bubble of ennui. It’s also become a parlor trick of plagiarism. The exchange of a hard drive and diamonds at an airport is blatantly “influenced” by Midnight Run. By the way, why did the airport retrogress into sordid pyrotechnics? The exodus to Mexico is a melodramatic retread of Breaking Bad. Finally, The Long Good Friday is the forefather to Frank’s fall-from-grace plotline.

The audience for Season 1 loved it for its gravitas from McConaughey and Harrelson, its deontological complexity and its chilling creepiness. The virtues have disappeared because Pizzolatto miscalculated the reasons behind the plaudits. Now, instead of a haunting chase into the catacombs, he panders to the audience (those who are left) with a verboten love story, heroic martyrdom, zero ambiguity (the baby coda with Jordan and Ani) and a shoot-em’-up finale.

Perhaps, I’ve been deluding myself this season by playing devil’s advocate and falsely advocating that Pizzolatto wasn’t a one-trick pony. I’m despondent that Season 2 not only wasn’t tantamount to Season 1 but it straggled behind in belabored subplots, pointless grimness and pedestrian direction. Case in point, the Rob Zombie-esque hallucinations of Frank’s slovenly father and his foes in the desert. By the last pat minute, I couldn’t help but be overwhelmed by a sinking sensation in the pit of my stomach. It wasn’t just the worst episode but it was incontrovertibly the most dissatisfying.